I carefully reread Jim Wood's recipe for the Simmer Cat. That confirmed my suspicion that the holes were too close to the top edge of the burner. I built a new Tornado Cat with 15 holes 1/4" in diameter, with the top edge of the holes 3/8" down from the top edge of the stove, to match the Simmer Cat. I reduced the height of the inner wall to 27 mm, and the two capillary hoops are now 21 mm tall. It works well as a Simmer Cat, with the pot closing the top. When used with a pot stand, leaving the top open, it takes 30 seconds to bloom with a tornado-like flame. The previous version only took 12 seconds. I think I can get the best of both by switching to a taller outer can. A 4 ounce steel can of mushrooms is taller, but probably too tall. I will have to cut it shorter and roll the cut edge inward and down after I seat the inner pieces.
Top

A steel can will take longer to get you inner jets into bloom.
http://www.woodgaz-stove.com/
Top 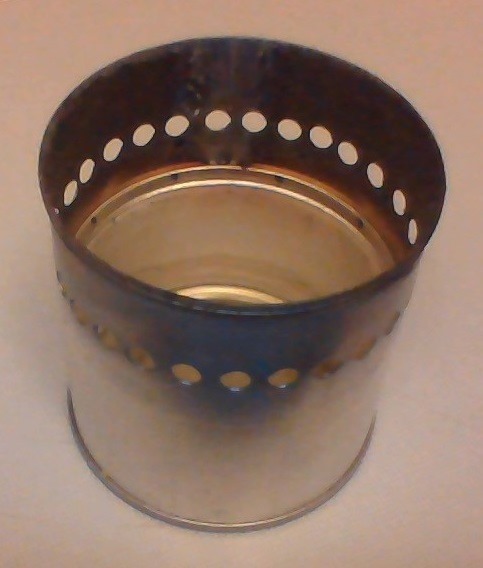 Here is the fourth version of my Tornado Cat alcohol burner. I use an 8 ounce steel can of Ocean Spray cranberry sauce. It is taller, the bottom is flatter, and it rests on a wider base (the bottom rim). The extra height gives enough thermal feedback to make the stove work well as a Cat stove with the pot resting on the top rim. The 9 pressurized jets appear 12 seconds after lighting the stove, and converge to form a tornado-like flame. The pot can be placed on the rim shortly thereafter, or a pot stand can be used. I expect it will burn at a faster rate when used with a pot stand, but I have not tested boil times yet.

zelph wrote:A steel can will take longer to get you inner jets into bloom.

The Underwood deviled ham can is made from steel, and so is the Ocean Spray cranberry sauce can that replaces it.

With the taller steel can, I was able to use nearly the entire height of the cat food / potted meat can as the inner wall, and use 1.125" tall capillary hoops. I believe that is what reduced the time to bloom.
Top

Well it's working out better for you. Any spitting of fuel out the jets?
http://www.woodgaz-stove.com/
Top

There is no spitting that I can see. I would expect yellow sparkles if it was spitting, but I see nice blue flames coming from the jets. I really did not expect any spitting, since the diameter of the 9 jets is less than a millimeter.

There were yellow flames coming out the 27 three sixteenth inch holes, but that may have been the coating inside the can burning. I will remove the ash from the inside and see if the color improves.
Top

zelph wrote:Jim Wood's Super Cat will boil 2 cups in 4 minutes if I remember the results when I test his design. The thing I didn't like about the design was the stove would stick to the bottom of my pot due to alcohol collecting on the bottom of the pot and causing a "seal" around the top lip of the stove. Once my water came to a boil it was a natural thing to lift the pot up and the stove was still lit and sticking to the bottom of my pot. Once the pot was tilted a little the stove would fall off and burning alcohol was spilled. That was a little scary. Further experiments showed I had to wait till the stove went out before lifting the pot.

The Super Cat was my inspiration to design stoves with integrated pot supports.

I have my doubts as to the cause. Water boils at a higher temperature than methanol or ethanol, so by the time the water boils, there should not be any fuel (or water) condensed on the bottom of the pot. I used an ohmmeter to test the rim of an aluminum can of Great Value potted meat. It was mostly non-conductive, although I did find some spots that completed the circuit. I would bet on some sort of coating over the aluminum. A coating could melt and stick to your pot. If that is what happened, then the problem could be fixed with abrasives and elbow grease.

I think Heet may leave a sticky residue after the alcohol burns up, but I am not sure how it would get between the rim of the stove and the pot. So it would be hard to blame "bad fuel"

It could have been worse (or better?) http://www.freewebs.com/jasonklass/paintedstove.htm
Top

I know the yellow container Heet has a sticky residue inherant in the formula.

DarenN made me a pepsi can stove.

It boiled 2-cups water in record time. The next burn, the time to boil dropped dramatically.

The boil time became only average.

I don't use that type alcohol stove, for that reason.

I like the Fancee Feest or the modified Starlyte.

My favorite is Starlyte w/lid because nothing will spill out: it goes in a pocket.
Do more with less http://ultralightbackpackingonline.com
Top

If you put 1 ounce of fuel in a super cat, 1/2 will be left in the stove when the 2 cups of water comes to a boil. In the process of heating the 2 cups, fuel is boiling, sputtering, splashing upwards and coats the bottom of the pot and causes the stove to seal to the pot. The pot gets wet with fuel only where the stove is. I hope I'm making myself clear.

Connie, many people like the safety of the no spill StarLyte. I use it in my tent 1st thing in the morning for hot chocolate.
http://www.woodgaz-stove.com/
Top

The first test of the Tornado Cat version 4 produced a yellow flame and turned the coating inside the steel can to ash. I removed the ash with a rotating steel brush.

I put an ounce of denatured alcohol in the Tornado Cat, lit it, waited 20 seconds, and set a Halulite Minimalist pot with 2 cups (480 ml) of 73F water on the rim of the stove. The flame quickly went out. I relit the stove, waited 30 seconds, and set the pot on the rim. 12 minutes after relighting, the water boiled vigorously. I removed the pot and watched the tornado-like flame until it died down and the last bit of fuel burned in the bottom of the stove. The flame was blue while the pot was on the stove.

The windscreen I used is 5 3/4" tall and 5 1/4" in diameter. It is partially closed at the bottom, with an 80 mm diameter hole in the center, and three legs which leave a 1/4" gap under the bottom rim. The stove and windscreen rested on a steel lid, which rested on concrete. The temperature was about 30F and the wind was mild.
Top
Post Reply
26 posts