steamjam wrote:It took some diggin around hardware stores to find the right parts, namely the seals, a couple weird (To us North Americaners anyways) O-rings and high temp washers. I had to use an ooold speciality issue Austin of Japan (AKA DATSUN) wheel cylinder honer my grandpops gave me when I was a teen to hone out the pump body just a little bit to smoothen the action and VASTLY improve the seal. And I had to spend an hour cleaning the tank and burner head because they were caked with Soviet era gas-goo. I used an old Optimus Inner burn cap I found on Ebay for 5 bux which fit perfectly.

But the stove from the era of the Soviet's try at Afghanistan runs great on regular pump gas. I'm actually far happier with this stove then the other models of Shmel I own. There is no wonkiness of the pot stand. Its solid as a rock with you pick it up.

Its less of a bear to start up, eventhough it does take a while to get roaring. So you got the inner burn cap to work?

Nice to be able to finds parts for vintage stoves and other stuff. I didn't know they made small expanding cylinder hones that small. An hour ago I was out in my frigid garage looking to see if I had a 1/2" reamer....nope didn't have one...didn't have any, must have given them to my son

What kinda odor is given off from burning plain ole pump gas?

I have an old kerosene burner stove that I've been meaning to fire up. It was used back in the days when "sad irons" were being used to iron clothes. Maybe tomorrow if it gets up above -1 degree here in my neckothewoods

I think the stove will work well with low odor mineral spirits.

Come to think of it, I no longer have a pressurized stove. Gave them all away in favor of wick style stoves.

I still need to fire up the double burner marine stove that I canabalized.

What kind of stove will you use in your high top van?
I think as a side project I am going to try one of those chinese built BRS-12 stoves. (LOW EXPECTATIONS).. It looks like an old US Army M1942 stove, or perhaps a love child from a pairing between a Coleman 442 and a Svea 123... 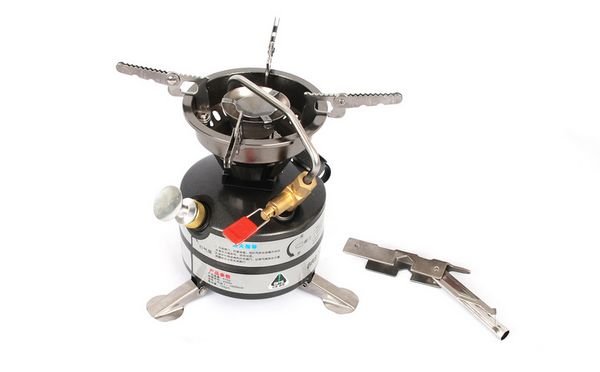 So you got the inner burn cap to work?
I ended up using an old optimus inner burn cap I found on Ebay for 5 bux. It fit perfectly into the burn head and works well.

What kinda odor is given off from burning plain ole pump gas?
Its not bad. Once you get the stove warm and rolling its no different then a Coleman stove when it comes to odor.

What kind of stove will you use in your high top van?
I use a Coleman 533 as the main stove and the Shmel 2 as my back up. I'm going to test out the Alcohol stoves like the Origo here soon to see how they do. I don't think much of the propane stoves and ovens these older high top campers featured in them which were popular in the 1970's.
Top

Give the Origo single burner a try. Keep checking on ebay for a used one. Look up the history of the ones that have sold to get an idea of what you'll have to pay.

They are quiet and fuel can't spill out. User friendly also

I went to my local auto parts store and bought a gallon of Berryman's carburetor chem dip. I simply threw the Shmel-2 tank in there and let the Berryman's do the work. 24 hours later it came out mostly clean on the inside. Unfortunately it also took some of the weaker paint off the tank body. See pic above..

Long long ago in a far away place, a friend of mine did small engine repair. to clean gunky carbs he boiled them in water on his kithen stove when his wife was at work

Might work with stove tanks and fuel lines. Be adventurous

I used the gallon carb cleaner like what steamjam used and it worked nice on my International Harvester tractor carb. The stuff smell strong.......strong enough to eat paint off

Well I gave the Riviera alcohol stove a go. The burner that came with it is not that great, so I replaced it with an old military Svea alcohol burner. Works much better. It's pretty stable and I figured out how to get it to simmer to an extent using the snuff cap the Riviera came with. I'm going to use it for the next week or so in my van to see how it does... I think tonight I'll try a stir fry..

If you want it to burn a little hotter put a couple of cotton balls down the fill section after you've put the fuel in. They will suck up the fuel to the top lip of the burner and give you some extra fuel/heat. The cotton won't burn unless they are low on fuel.
http://www.woodgaz-stove.com/
Top

After 6 months of almost daily use, the bottom fell out of my wood gas stove.. And these old German army butter dishes (Only the Germans can overbuild a butter dish!) work GREAT as waterproof soap dish/containers!