I bought a camper (kinda)

IMHO (I'm going o catch flack for this) the Studebaker HAWK is a much more timeless design then Avanti.

I liked the Avanti because of the aluminum body. Made me think of Land Rover's...always wanted one of those

Question? does the railroad have utility carts that sit and roll on one rail? I had a need to carry a 5 gal bucket a long distance along a railroad track. The bucket was filled with gear. I had to walk and do visual inspection of the plants growing along areas of "natural prairie remnants" I made a device that worked well for me. I was just wondering if the railroad had something commercially made.

I vaguely remember something that had 2 wheels. One wheel attached to a long out stretched axle that acted like a stabilizer arm that rested on one rail while the other wheel was on the other track under a bike/box/something or other.

This thing was portable and easily attached to the rails. Put on you engineer thinking cap and come up with something. 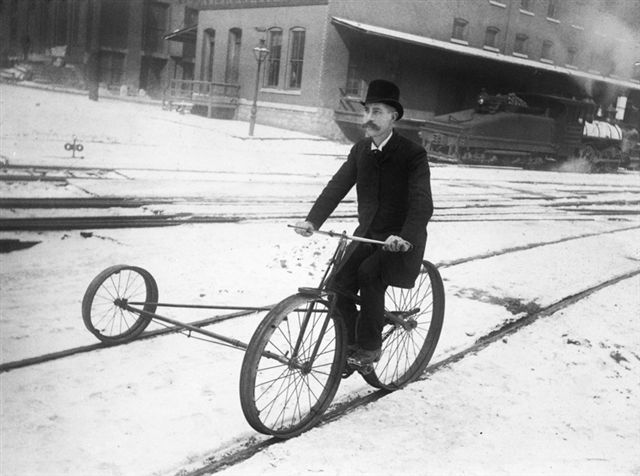 If I had one of those on the railroads today what would the consequences be?

If I had one of those on the railroads today what would the consequences be?
Well I hope your wanting to try that on abandoned track.. And I cannot imagine anyone trying it on standard gauge. Narrow gauge yes.

I've ridden a couple of those things, including a 1901 wooden spoke lever "bike". They are not as fun as it looks 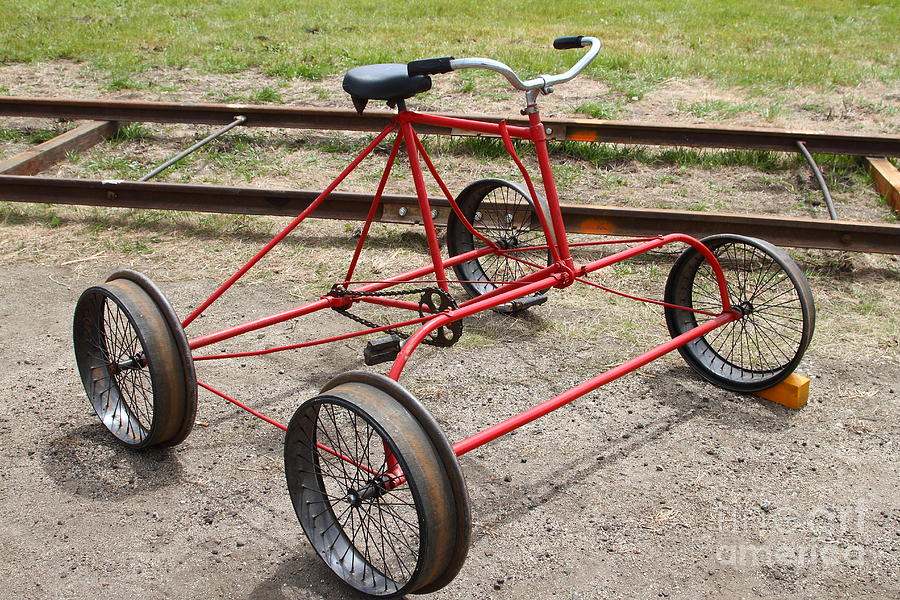 In this day and age of titanium, magnesium and carbon fiber composites we should be able to come up with a nice lightweight rail bike. Couple it up with a gyroscope and just one wheel and were in business.
Ages ago I saw in a popular mechanics book a 2 wheel inline vehicle made for the US forestry division. I had a gyroscope within it's body. It was pictured going across a fallen tree over a creek bed. Now how cool is that????

zelph wrote:It's a great idea. Nice way to bike hike into some of the lesser traveled areas. Especially if you start at the higher elevations and coast your way down

The most white knuckling, butt puckering, re-evaluate your life thing happened to me on one of those rail bikes. It involved a 4% grade, 2 miles of being out of control with no brakes going through two surface street crossings (wig wags went off and the gates went down) and stopping 20 feet short of a freeway crossing where the crossing gates were turned off for maintenance. Needless to say I had alot of explaining to do when my boss turned up.
Top

All is well that ends well

I'm glad you didn't make the freeway!
"Many of lifes failures are people who did not realize how close they were to success when they gave up".....Thomas Edison

I bet your hair is the color "white" by now

Yes. but the rail-bike had steel wheels and the rails were wet. All I did was slide and pick up more speed.I think I was doing like 40mph at the fastest.

the photo of the red one up there shows it has no brakes....Yikes!!!!!!
Yup. More often then not they didn't have brakes. It was just assumed you weren't dumb enough to do down a hill with one. Some later ones had mechanical rail brakes that used a wooden brake show (AKA Mud scrapers) which turned useless the minute any moisture touched the rail.

It's actually a custom build. Most rail bikes were just bicycles with an outrigger.

I bet your hair is the color "white" by now.
Wait till I tell you about having a tunnel cave on me while I was trying to put out a fire on one of the wooden coaches!
Top

Oh and I've been meaning to try out one of those Origo style alcohol stoves for me van for a while now to see if I can get away from Naphtha and propane stoves. (Still gonna keep the Russian gasoline stove) I didn't really want to shell out the $200 for the Origo when this was just a look-see and try...
I was on EBay just now and I got a "Riviera Indoor-outdoor cooker" alcohol stove for $25.00. It looks like it operates on the same basic principles as does an Origo, and is similar in parts. It's got to be from the '70s because of its awful pastel green colour, but I figure for $25.00, I was willing to give 'er a go.. If I dig on it, I'll upgrade to an Origo..

Return to “Just For The Fun Of It”